We’ve written before about the Post-Literate Era, populated by the Short-Attention Spaniels. You know, those people you’re trying to reach, with minimal success?

Turns out, it’s getting worse. A substantial number of Americans are functionally illiterate, and compared to other nations, slipping farther behind. (If you’re marketing to people in Finland and Japan, no problem. You can even use three-syllable words.)

There are numeracy problems as well – numbers present insurmountable obstacles as often as words do. This report has data that will amaze you. They detail the tests, which seem like simple tasks, but are utterly baffling to huge chunks of our short attention population. We’re Ridgemont High, and mostly Spicolis. 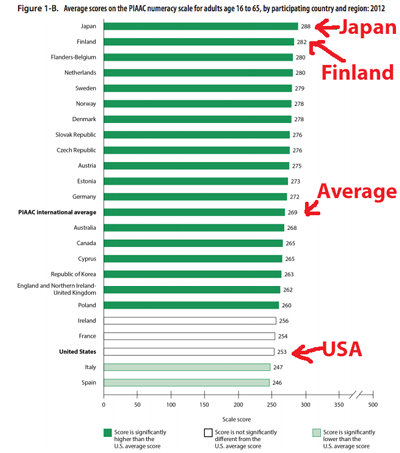 A wise client once showed me research that validated his opinion that most people cannot process percentages, so any attempt to persuade someone with percentage comparisons was a doomed message. I’ve avoided them ever since, even in the face of clients in banking and insurance who believe a % is a headline.

The perceptive writing coach Anne Wylie wrote about this recently, and offered solid suggestions to edit yourself to reach more of your struggling audience. We heartily endorse those approaches – for example, we test every blog post and BrandAid against the Flesch Readability Scale to make sure it measures over 60.0, relatively easy to read. We have very few spaniels on our mailing lists, I’m sure, but hey. It’s a useful discipline.

One approach we recommend to clients about text is to have less of it. Fewer words. Shorter words. Shorter paragraphs. A drastic reduction in big blocks of gray type. When you realize your prospects don’t read, or won’t read, or can’t read, you face a choice. Push that boulder up that hill, or use other tools. Video. Infographics. Animations. Some other shiny thing.

Feel you can’t escape heavy text? Can’t explain your message in pictures, songs, saxophone solos or interpretive dance? Call us, and we’ll talk you off the ledge.