At the now-defunct Grant/Jacoby agency, the late, great Dick Scott and I used to collaborate on an annual Xmas card for the fictitious Scott-Killian Card Company (“When You Care Enough to Send the Second Best”).

In 1981, groping for an idea, we settled on a little pun, dressed up with an Edward Gorey-style illustration. It turned out to be pretty charming. 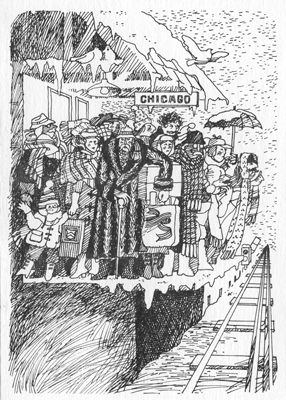 And the payoff, inside:

Twist #1: We sent it off with no great expectations, but on the very day it arrived in the mail, there was a wildcat transit strike, and there was, indeed, no El. Hijinks ensued, and we got lots of ink in the trade press for our crystal balls. (So to speak.) Unlike tens of thousands of stranded commuters, we had fun.

Twist #2: A few Christmases later, another Chicago agency sent out a complete ripoff of the idea. Same joke, similar setup on the front. They even had the nerve to publicize it. One would hope some art director swiped it and the top brass never realized they were plagiarizing. We never made a fuss about it, but from that day we lost all respect for that agency (which we will not name here) as we thought their grip on ethics might be a bit slack.

Anyway. Happy, merry, and all that.