I was reminded last night of our last discussion of brand linkage backfire, when I saw the first few seconds of an amazing tv spot I’d seen multiple times before. 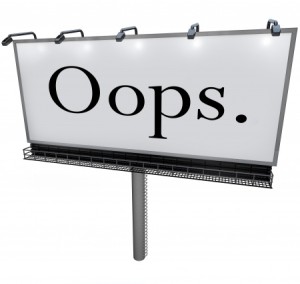 You’ve probably seen it: the animation begins inside the complex gears of a clock or watch, then pulls out past machine-like swimmers, birds, fish, sailboats, cars, bicycle riders racing around a mechanical velodrome surface, flying off to a moon surface with landing craft and astronauts, then farther out to a mechanical solar system model and more. It’s hypnotically beautiful. Gorgeous. Clearly expensive. Wonderfully creative.

But even as I blurted out, “Ooh, I love this spot,”  I realized immediately  I had no idea whose spot it was. Do you remember? The brand only becomes visible in the last few seconds. Spoiler alert: it’s a brand of watch. But which one? BTW, if you remember the wrong brand, who benefitted? See why we think an ad backfire is a very expensive mistake?

Now, some people might jump to the wrong conclusion, assuming one can count the number of mentions of the brand to measure linkage. Not so. There’s a convincing study by researchers at Millward Brown that blows up that easy answer.

To answer addicts of the “more mentions the better” school of  advertising, I present the case of a direct response campaign for something called pcmatic.com. I know it’s called that, because the tv spot manages to repeat the name a mind-numbing number of times. The shills on screen, clearly allergic to pronouns, repeat the name in every sentence. The man and woman fight to see who can pitch it more often, as in “pcmatic.com will do that?” “yes, pcmatic.com is peachy swell” “gosh, pcmatic.com leaves me in orgasmic delight.”  Or something like that.

If the theory states 15 mentions will be wildly memorable (rather than making your eyes bleed), that backfires, too. It’s not how often, but how. It’s not about being beautiful/likable or being obnoxious/obvious. So what makes brand linkage really work?

You can’t just relay on that old test, “if your competitor stuck his name on your ad, would it work for him?” That seems like a reasonable measure, and it would be true of the wristwatch spot, but it’s incomplete.

Nor can you count on the show-them-right-away test. Not everybody enjoys the visual immediacy of Corona’s beach, or Ford F150’s slamming graphics. But those are standards to emulate. There are many other ads that tell a story, draw you in, and then make you aware of the payoff.

The ad narrative must be the brand’s narrative. The storytelling must spring from the emotional truth of the brand. Think of how organic the IBM “smarter planet” campaign is. Smart people saying and showing smart stuff, being “IBMers” … the people and the story and the brand all contribute to the credibility of the narrative. And that could never backfire.