Evolution seems to be difficult for some people. Most Americans, for example, do not “believe” in the theory of evolution. Probably more of them believe in the theory of gravity, and do not walk off rooftops.

The Darwin stuff all over our brand pretty much kills our chances of getting the Creation Museum as a client. Sigh. 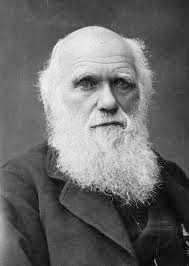 Did not discover evolution.

Darwin did NOT discover/invent/create the theory of evolution, by the way. His grandfather Erasmus, for one, wrote a book about it. Surprised? Most scientists even early in the 19th century accepted the evidence of evolution. What Darwin actually did was discover and reveal the mechanism that make species evolve: natural selection, through adaptation.

And it’s adaptation that’s important for your brand. (Our theory.)

• Because some of your prospects have the attention span of a goldfish.
• Because they’re evolving, adapting to new sources of information, buying criteria and pathways to verify you.
• Because communication is evolving: marketing was a sermon; now it’s a dialog.

Most of us grew up with Communication as Document. We have to get over it. Book, magazine, song, film, annual report, ad, love letter. All were static. All were “finished” and unchanging. When a printed catalog (remember them, old timers?) came off the printing presses, it was already 1% obsolete. The Yellow Pages were not yet an antique, because they had fresh information, less than one year old! Sports scores and stock market results arrived with the morning newspaper (if last night’s game didn’t go too late.)

Hey, that blew up. Your website is not and never will never be finished. It’s a Process, not a Document. Twitter is a firehose. YouTube parody epidemics break out daily. Last year’s media plan is obsolete. Maybe last year’s tone of voice is, too.

Nothing stands still. So you can’t.