Once your brand is visible (and that is its first duty) your positioning will sooner or later land you in one of three buckets: Better, Cheaper or Different. 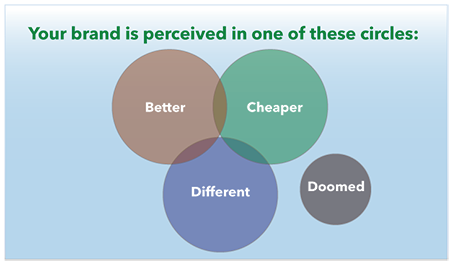 There is also of course, New, which is useful, but temporary.

If you fail to qualify for any of those mind spaces, you get a free ride to Doomed, the bottomless oblivion of undifferentiated brands that rarely if ever climb into the selection set when purchase decisions are about to be made.

Overly simplistic? Sure. But for every contested category you can think of, dominant brands clearly belong in one of those Venn diagram circles. Take airlines, for example: Emirates and Virgin are Better, Spirit and RyanAir are Cheaper, Southwest is Different. Where does that leave United? Uh huh.

Notice in our Venn diagram we allowed for some overlap. There are indeed well-crafted power brands that occupy two circles. Think Tesla, which many see as Better and Different. Or Old Navy, seen by many as Cheaper/Different. There are few examples of Better/Cheaper, but it’s possible.

What’s impossible is to occupy all three circles.

Note in our diagram we don’t allow a triple overlap. You might argue for one; I’m willing to be proven wrong since I can’t think of one in any category. I also believe that no brand should even dream of being all three – if you are perceived as Better/Different you can and should charge a premium price. It would be foolish to throw away well-earned margin by also claiming Cheaper.

Where is your brand perceived? You can never dictate positioning and command people to share your vision; that’s wishful thinking. You can however influence your audiences with a strategic brand narrative to mold their opinion of you over time. It’s as valuable as it is difficult: Ask us for an evaluation of your brand narrative’s strengths and weaknesses. It’s a conversation we can both profit from.