We have an unfortunate  tendency to use the “royal We,” aka the “papal We” or “editorial We.” Frequently when we do, we get scorn heaped on our head by our wife, who punctures our balloon. In singular fashion. 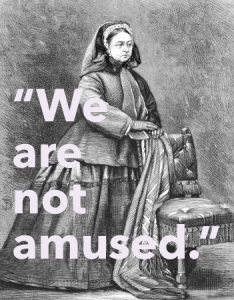 Queen Victoria’s classic (if likely apocryphal) response to a joke.

Maybe we shouldn’t. That is, maybe I shouldn’t, but decades in the creative trenches, working in a collaborative business, teaches us to subdue the I-strain of taking individual credit for any success. Clients often ask, “Who wrote that headline?” Or “Who designed that logo?” Our answer invariably is, “the agency did.” We are asked to park our egos at the door, as they say, because 99% of our efforts emerge from a team effort.

The same goes for the other side of the coin, goofups and pratfalls. “Who made the typo?” “Who sent the press release early?” Answer: “The agency did.” We’re not dodging blame, but sharing it.

Even obviously individual arts such as illustration can’t escape the influence of the strategists and planners who constrain or guide or revise the choices that go into the final product. (Hey. Who said it had to be horizontal to fit?) As a Creative Director, I (or should I say We?) find it useful to tell new team members “I’m here to vandalize your work.” It’s said with a wink, but it sets realistic expectations. As you might expect, this results in a lot of back and forth, some creative destruction, and evolutionary improvement.

The lines began blurring 20 years ago, when the neatly compartmentalized team of copywriter + art director began to morph into something looser. Today, a writer without a sense of design is unemployable; an art director without verbal sensitivity is equally obsolete. Back during the last ice age, I/We worked with an art director who only half-jokingly referred to copy as “that gray s**t that clutters up my layout.” Those were the days, my friend.

Bottom line, a creative agency is not an assembly line with interchangeable machine parts. It’s more like an organic process where talented multi-disciplined people approach a client/brand problem by letting imagination loose, constrained by strategy. Anchored creativity, we (the royal We) call it. A balloon and a brick: see our little video about that metaphor.